All Collections
Writing in Scripto
Creating or Importing a Script

Creating or Importing a Script

How to Create a New Script

You can create a new document from the Dashboard by clicking the script format you want.

You can create a new document from the Folder Browser by clicking the + New document icon. Select the script format that you want, and the blank document will open in the editor. 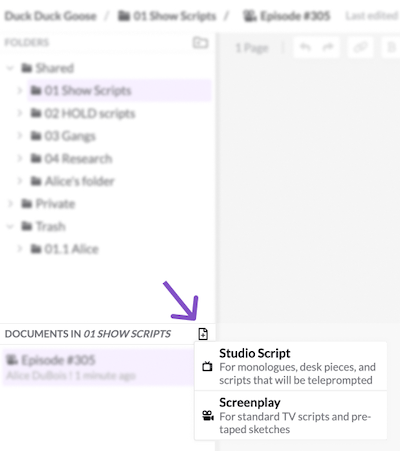 Scripts will be created in the folder you were in when you clicked New Script but you can always move a script between folders.

New scripts are given a name of Untitled so you should give your new script a name.

How to Import a Script from Final Draft

Or from the + button on the Folder Browser. 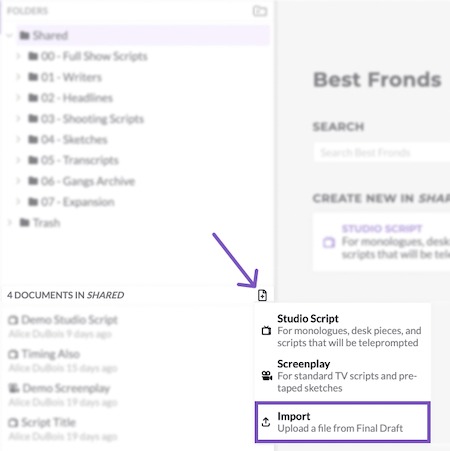 Select the Final Draft document that you want to import using the computer file browser that opens, then hit Open.

Scripto will create a new Screenplay document from the Final Draft document that you selected.

The document will be created in whichever folder you were in the when you clicked the Import button, but you can always move a script between folders.

❗️Currently, you can only import Final Draft (.fdx) files.

If you have a other file types such as Word (.doc), PDF, Fountain or text (.txt), create a new blank document in Scripto, and then copy/paste the text of your script into Scripto.

Some file types will paste in with the block types set quite accurately and won't require much cleanup. Other file types will not paste cleanly so you'll have to go through the document and set the type (eg. Dialogue, Parenthetical, Character) on each block of text.

Naming or renaming a script