All Collections
Production Features
Using the Push to Prompter feature

Using the Push to Prompter feature

Scripto's Push to Prompter feature lets you send scripts directly to the teleprompter. Here's how.

Note that only show members with permission will be able to push scripts to prompter! Here are instructions on how to set up Push to Prompter permissions.

1. Make sure the Prompter Helper App is open and ready

In this example, the Prompter Helper app is connected to a show called The Littlest Tug Boat and the selected Prompter Directory is a folder called Prompter Testing with Scripto that lives in /Users/alicedubois/

2. Go to Scripto.live and open the script you want to push

Once the prompter operator confirms that the Prompter Helper app is ready, go to Scripto.live and open the script that you want to push to prompter.

⭐️ When you push a script to prompter, Scripto's smart filters will only send the block types that should appear in prompter. Scripto pushes dialogue, character names, and parentheses blocks to prompter, and filters out act, slug, bracket, and general block types so they do not end up in prompter. Note that you can't push a script to prompter unless it contains at least one dialogue, character names, or parentheses blocks.

From the script editor, click on the ... menu in the upper right and select Push to Prompter

The will open the Push to Prompter window. 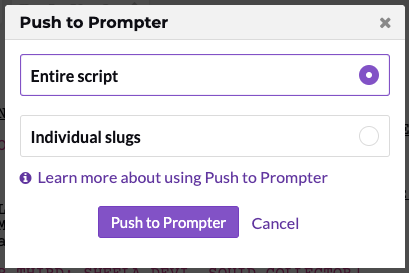 The first time you push a script to prompter, Scripto will default to Entire script.

On subsequent pushes, Scripto will default to Individual slugs and it will check off every slug that has changed since the last push to prompter. These defaults are intended to minmize overwriting files in prompter. You can always override the defaults. 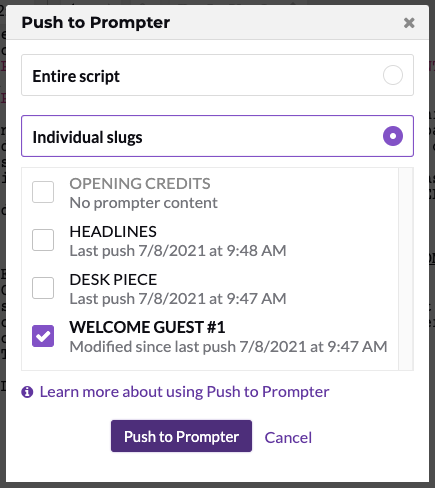 If you select Entire script, Scripto will push every slug that has content for the prompter. (Scripto does not push slugs that have no content for prompter.)

If you select Individual slugs, Scripto will only push the slugs that are checked. Slugs that have no content for prompter cannot be selected.

If the order of the slugs has changed but the contents of the slugs has not, select Individual slugs and make sure no slugs are checked, then push. That will update the show's run order (.dat file) without changing any of the script files.

When a push is successful, the Prompter Helper app will show a confirmation message in the Recent Updates area. For example:

4. Opening the script in the teleprompter

If you are having problems getting Push to Prompter to work, take a look at our tips for Teleprompter Troubleshooting